Why information policy is important: an interview with Paul T. Jaeger and Natalie Greene Taylor

Why information policy is important: an interview with Paul T. Jaeger and Natalie Greene Taylor

What a year! The pandemic has touched every person’s life in myriad and unequal ways. The political and policy landscape has also had a significant impact as we’ve changed administrations and seen shifts in every branch of federal government. As ALA’s Senior Director of Public Policy Alan Inouye wrote in the foreword to Foundations of Information Policy, “As the internet and information technology have permeated every aspect of daily life from driving to dating, information policy has become everyone’s business.” This has only become more visibly true as digital divides were more exposed than ever before during the pandemic.

To help us navigate this changing landscape, Paul T. Jaeger and Natalie Greene Taylor have provided a primer for understanding and engaging at all levels of government in the key information policy issues of our time. It was a pleasure to catch up with them and learn more about their work and reactions to our current policy landscape.

What was each of your first interactions with information policy, and why do you think it's important all library staff are more knowledgeable and engaged on these issues?

Natalie Greene Taylor: My undergraduate degree is in political science and while that mostly taught me that I had no desire to go into politics, it also served as a foundation to understanding how much policy impacts behavior and equity. When I began my MLIS program I was interested primarily in the educational aspects of librarianship, but I also took a course (with Paul!) in e-government which demonstrated the inextricable relationship of government decision-making and access to information. As governments and other information distributors were moving more information online—ostensibly making access easier—political decisions were simultaneously reducing access for many people, because of a lack of education in finding information, in some cases a lack of physical access to the technology to get to the information, and concerted government efforts to seal off access to information.

Paul T. Jaeger: I went to law school about 20 years ago, and there I began to understand the extent to which human rights were quickly becoming dependent on equity of information access and literacy. As soon as I finished law school, I began an MLS program and learned that what I wanted to study (the intersection of law, rights, and information) was known as information policy. Since then, rights, justice, and equity have become infinitely more dependent on information policy than could even have been imagined in the early years of this millennium.

As for the relevance of information policy to library professionals, it manifests itself in innumerable elements of librarianship, across every type of library. Information policy impacts how the library can share and loan out materials, the parameters put on the use of electronic materials, licensing agreements, privacy policies for patron information, the ways the library manages its own information, the ability of law enforcement agencies to request library information, the amount the library pays for materials and its Internet connectivity, how materials challenges are handled, what community groups can use library facilities for, and the access that community members have to information outside of the library, among so, so much else. This book was written in no small part to help librarians name these policy forces and understand how they are burrowed into every corner of the everyday functioning of a library.

2020 was an incredibly disruptive year--what worries and excites you most about the current information policy context we find ourselves in?

Paul T. Jaeger: I’ll start with the worry, because it is a huge worry. And I am good at worrying. Between the pandemic and the fomenting insurrection, 2020 was truly the year of disinformation. While not a new problem, the ability of information technology now to spread disinformation instantaneously and replicate it infinitely is a gigantic problem for policy to tangle with. The “Plandemic” conspiracy video is maybe the best example of how swiftly disinformation can now spread. The video was an incoherent mishmash of pandemic conspiracies, claiming that the virus was not really a threat, that the CDC had a cure they refused to release, and other such drivel. It had been viewed by millions of people and was available in 10 languages before non-partisan fact-checkers even identified its existence. Even when fact-checkers flagged it, the video was still viewed many, many millions more times.

As for excitement, we can hope for a thoughtful approach to information policy generally by the new administration. The new administration enters as one focused on rights and justice, so we can hope that information policy issues like fostering equity of access to available and affordable Internet connectivity and ensuring accessibility for disabled people, both long-festering issues made even more clear by the pandemic, will finally be treated as policy priorities.

Natalie Greene Taylor: I’m no luddite—new technology often excites me even as I’m concerned about the side effects. So I think the next few years will hopefully bring a new generation of policy-makers and elected officials who have more experience with both the good and bad sides of new tech and are able to make decisions accordingly. I have many, many concerns, though. Policymaking is generally reactive when it comes to technology, and in the case of AI and virtual reality, I think that pattern could be hugely problematic. I think educational policy has a scattershot approach to technology and children which is both too fear-based (screen-time is terrible!) and too focused on skills-based teaching (STEM and coding instruction without the ethical education to accompany it). The impact of technology on climate change is just one part of the existential dread I often feel about the future of our world, and policy has been woefully inadequate in addressing that so far. Disinformation and misinformation online are only part of a general cultural shift in communication that has been aided by policies that reduce the expectation that the media and experts will be truthful. But I’ll echo Paul that I’m optimistic that we at least are talking about these issues and hopefully that will induce lawmakers to pay attention, as well.

Congress is so often the focus of advocacy—what other policy levers stand out right now (I'm thinking about executive orders, for instance) and how can advocates influence these levers?

Natalie Greene Taylor: I’ll shift the question a bit and say that I think librarians might be better served by paying more attention to advocacy at all levels of government, including local and state. The American Library Association does a nice job keeping members apprised of the federal legislation that could impact library funding, and we should pay attention and contact lawmakers when those issues come up. That said, getting involved in your state library association (which typically has an advocacy arm), sending information to local stakeholders (like school boards and local lawmakers), and inspiring your patrons to stand up for libraries can make a real difference.

Paul T. Jaeger: Information policies heavily shape the actions of many non-governmental actors, but sometimes the lack of policy is just as significant in shaping actions. The extensive set of policies related to intellectual property gives owners of intellectual property, such as publishers, many rights in protecting what they own for many, many years. In a case like that, policy gives priority to rewarding innovation over promoting public access to materials.

Social media companies, in contrast, have benefited enormously from a lack of policy related to their activities. From the beginning of the browseable Internet, the U.S. government has primarily left the Internet alone to promote economic growth. Given how misinformed so many members of Congress seem to be during the hearings related to major technology companies, the lack of legislation may not be the worst option. After the obvious role of social media platforms in allowing the spread of misinformation tied to the insurrection, however, Congress may become more inclined to regulate social media companies.

A specific information policy issue of interest to many non-governmental entities —and many governmental entities, as well—that seems likely to be addressed during the Biden administration is net neutrality. Early in the Trump administration, the Federal Communications Commission ended the policy of net neutrality, which had required Internet service providers to treat all online content equally in terms of access and speed. This ruling claimed that the policy of treating all Internet traffic equally was holding back commercial growth. Now, with the change of administration, it seems very likely, whether through rule-making, legislation, or the courts, that net neutrality will return as a policy pillar of the internet.

One of your study questions in the book seems like it could be a very useful primer for advocates today facing budget threats. Could you speak to: What are the differences between advocacy for issues and advocacy for funding, and how are they connected?

Natalie Greene Taylor: Advocacy for funding is more straightforward—we need x amount of money for this program, collection, service, etc. Advocacy for issues requires more education—there needs to be a solid understanding of the issue, how it impacts the library and its users, and the various policy mechanisms that influence the issue. That said, messaging is critical to both, as is knowing the stakeholders and what their interests are.

Paul T. Jaeger: Advocacy for issues and advocacy for funding can be two parts of a larger story; depending on the context you may need to tell one or both parts of that story. The funding portion of the story is demonstrating the need for the requested resources and the contributions to the community that the library can make with the resources, while the issues side of the story is educating policymakers and community members about the decisions that will better enable the library to serve the community and its members. 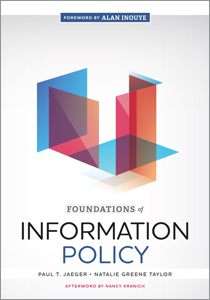 In the book you outline how to advocate for better policy, including crafting messages that vary by audience. I find this quote in another ALA publication Proving Your Library's Value compelling in this context: "Don't tell them what you want to say. Tell them what they need to know." What is an example of how a message might be shaped for different audiences—including across the political spectrum?

Natalie Greene Taylor: I think this is where empowering your patrons to speak out about issues can be enormously helpful. Voters still have sway over elected officials and helping ensure that your patrons know that they can and should speak about the aspects of the library they find beneficial will go a long way in getting lawmakers’ attention.

Paul T. Jaeger: It might be useful to imagine this as figuring out how to connect your goals to the goals of the audience you are talking to, emphasizing the elements that are most salient for that audience. For example, a single position that the library is advocating for might be explained to business leaders as helping to promote local economic development, to elected officials as building awareness of the community, and to community members as giving them better services.

Thanks to you both! There is always so much to talk about related to the intersections of library values and services with public policy. I hope library staff and allies will ground themselves in Foundations of Information Policy and take up this work at the community, state, and national levels. We encourage everyone to join ALA’s advocacy ranks by subscribing to our alerts and taking advantage of our state and local advocacy resources. Library advocacy and engagement was critical to securing the largest single increase in funding for the Institute of Museum and Library Services through the American Rescue Plan Act, and we have so much work yet to do related to broadband equity, balanced copyright, privacy, and more.