Thoughts on Transparency and the Preservation of Social Media

Thoughts on Transparency and the Preservation of Social Media

(Disclaimer: The findings, interpretations, and conclusions expressed in this post are those of the author[s] and should not be attributed in any manner to The World Bank, its Board of Executive Directors, or the governments they represent.)

In late March of 2019, Business Insider reported that a number of posts by Mark Zuckerberg were “mistakenly deleted” by Facebook, including all of his posts from 2007 and 2008.

“These disappearances, along with other changes Facebook has made to how it saves its archive of announcements and blog posts, make it much harder to parse the social network's historical record. This makes it far more difficult to hold the company, and Zuckerberg himself, accountable to past statements — particularly during a period of intense scrutiny of the company in the wake of a string of scandals.”

The Business Insider article goes on to describe the “Newsroom” that Facebook announced with some fanfare, but points out that links from older news articles to Facebook official posts are now broken. In theory, all old posts are now available via a Notes tab—but as I wrote this, the Notes tab returned no content at all.

Responding to a post on Twitter about the Business Insider article, Michael Zimmer tweeted: “Worry not. We have everything Mark Zuckerberg has ever posted or said in public archived at The Zuckerberg Files. @ZuckerbergFiles https://www.zuckerbergfiles.org/”. 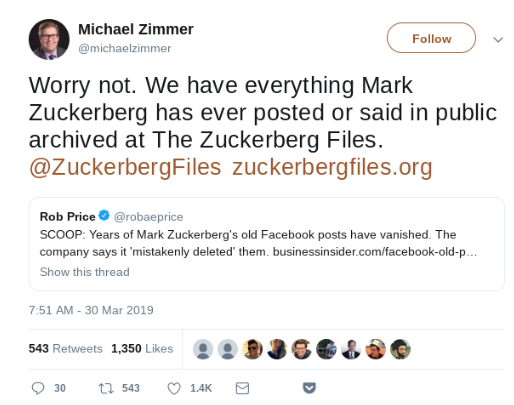 Zimmer is the project administrator for the Zuckerberg Files, described on its website as “a digital archive of all public utterances of Facebook’s founder and CEO, Mark Zuckerberg, spanning 2004-2019. Nearly 1,000 full-text transcripts and 250 video files are available for researchers to download, analyze, and scrutinize.” The archive is hosted on the University of Wisconsin Milwaukee's Digital Commons.

An example, chosen at random, of metadata about a blog post by Zuckerberg from 2007 shows the following information. Included is the original URL to the blog post —which now sends you to the main page for the Facebook Newsroom, with no way to find the blog post in question. 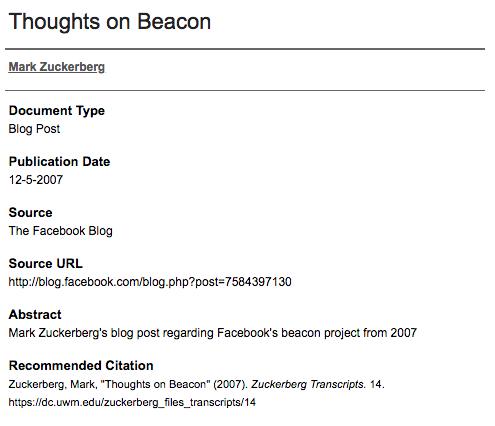 While contextual information and metadata about these records are available for download by the public (see above), access to items in the collection of itself requires an application. You must submit a research project or other purpose for which you are requesting access, per the Code of Best Practices in Fair Use for Scholarly Research in Communication.

In his essay “The Government Has an Instagram Problem,” Alex Howard, former deputy director of the Sunlight Foundation, calls attention to the tug of war between social media platforms and the rules meant to ensure transparency of the work being done by our government employees and politicians.

“Every time a social media platform becomes popular, savvy politicians and campaign consultants figure out how to reach people there. And every time that happens, these platforms, which were not designed for political or government activity in the first place, fail to build in disclosure and archiving features. Such features would enable the transparency and accountability that modern democracies need.”

These issues are not new. In 2003, UNESCO adopted a Charter on the Preservation of Digital Heritage, which then was followed up in 2012 with The Memory of the World in the Digital age: Digitization and Preservation. The full proceedings of the conference are available, as well as the text of the Vancouver Declaration (and yes, those links are to Internet Archive Wayback Machine copies of the web pages, even though the originals are still online). There is a rich set of preservation resources available on the Memory of the World site. The Implementation Guidelines for the 2015 Recommendation Concerning the Preservation of, and Access to, Documentary Heritage Including in Digital Form by Ray Edmondson is particularly interesting, given the broad scope of its recommendations to governments, memory institutions, and others.

“The Recommendation calls on member states (represented by their governments) to undertake a range of actions. Some of these actions are — and can only be — directly taken by governments. But most of the clauses in the Recommendation call on governments to encourage, empower, support and facilitate actions by other parties, such as memory institutions, their partners, private individuals, national Memory of the World committees and professional associations. Each has their role to play in the preservation and accessibility of the documentary heritage.”

Much of the writing on preserving social media has focused on technological and ethical challenges, but some has also pondered how do we chose what to save. As with websites, social media typically involves many interwoven links and conversations. Where to draw the line between what we preserve and what we don’t is a complex question, with no easy answer. Two great recent sources for reading more about preserving social media (both by Sara Day Thomson) are: 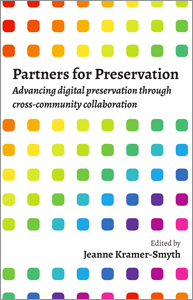 Whose responsibility is it to tackle the preservation of social media? Governments? Social media platform creators? Collecting archives, such as the Zuckerberg Files? The international community, concerned with the preservation of documentary heritage? Again, there is no easy answer, but it is important to keep examining these questions and intentionally divide up the responsibilities associated with addressing them. The greatest danger comes from assuming someone else is worrying about it. That assumption is most likely to result in important digital documentary evidence—necessary to ensure transparency and prevent corruption—falling through the digital cracks and disappearing .

Jeanne Kramer-Smyth writes blog posts about the intersection of archives and technology at SpellboundBlog and edited the recently published book Partners for Preservation: Advancing Digital Preservation through Cross-Community Collaboration, published by Facet Publishing. She is also quite active on Twitter.

Compact copyright: an interview with author Sara R. Benson
An interview with Ellyssa Kroski about VR programming
Why information policy is important: an interview with Paul T. Jaeger and Natalie Greene Taylor
Responding to rapid change: an interview with Callan Bignoli and Lauren Stara
Insights on marketing with social media: an interview with Beth C. Thomsett-Scott
An interview with Stacey Greenwell about management basics and academic librarianship
Free PDF with coloring pages, writing prompts, and uplifting quotes!
Interview: Deborah Rinio on STEAM for elementary school learners
Free PDF e-book—Library as Safe Haven: Disaster Planning, Response, and Recovery
Access to ALA Editions | ALA Neal-Schuman e-books during the COVID-19 pandemic